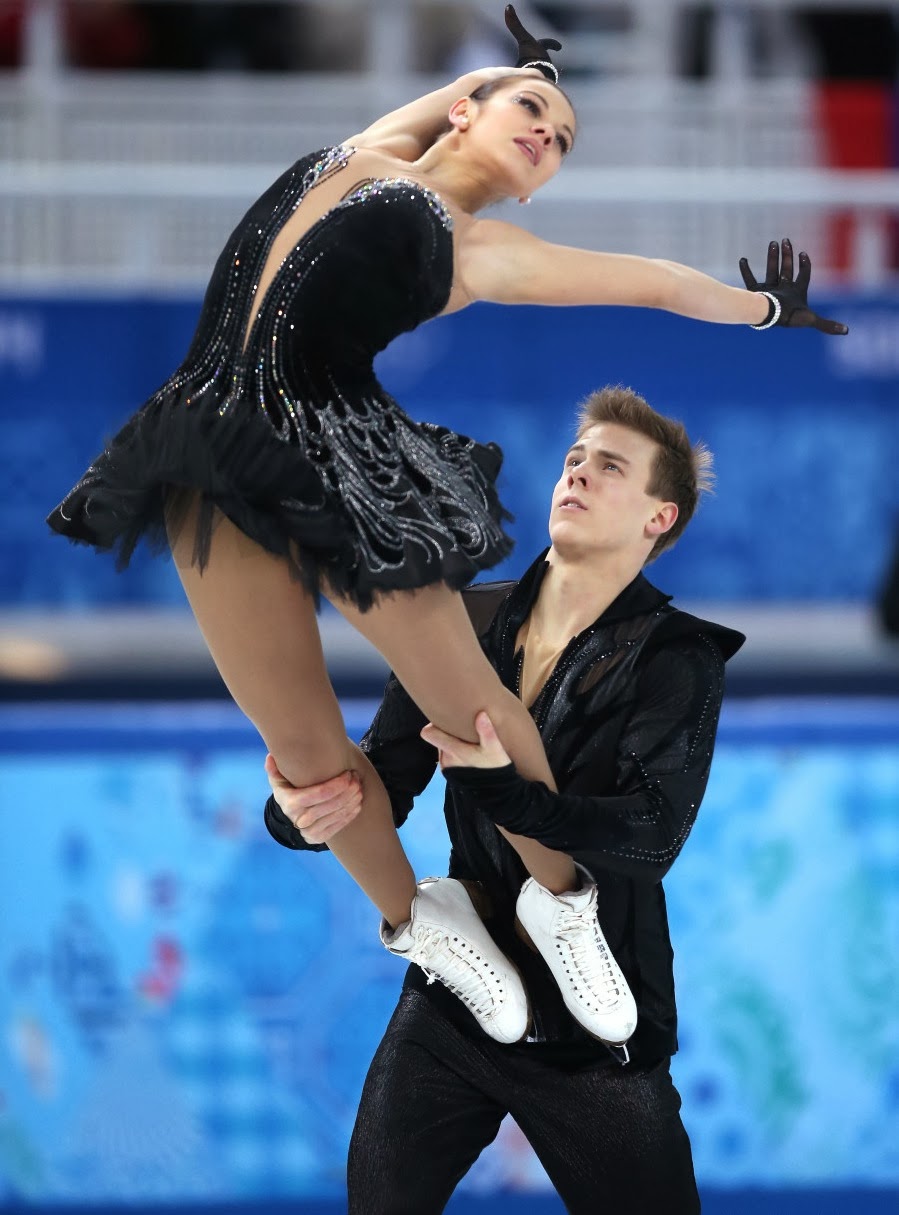 For the past week, I’ve been mesmerized by the tiers of crystals, layers of chiffon and abundance of color skating across the ice at the Sochi Winter Olympics. The Russian figure skating team has been at the fashion forefront, and fierce on the ice too. My favorite pairs costume was the tulle skirt Elena Ilinykh wore for her dramatic free dance to Tchaikovsky’s Black Sawn. Wearing a bodice lined with intricate beading and a tutu reminiscent of the ballet’s dark character, Ilinykh stunned all as she stood on partner Nikita Katsalapov’s stomach and feathered herself like the black swan. Katsalapov’s no-frills costume allowed her to shine. By far, one of the best performances and best costumes in the figure skating competition.

The couple also dazzled in Gatsby-inspired garments for their short program to “Bei Mir Bist Du Schoen” by Sholom Secunda. Ilinykh wore a beautiful shade of dusty rose which paid compliment to her creamy complexion and dark hair. And can we please talk about her fabulous flapper-style headpiece?! Gorgeous indeed. And I almost forgot about Katsalapov (as men’s fashion can fall off my radar from time to time). He looked handsome in a black tuxedo. 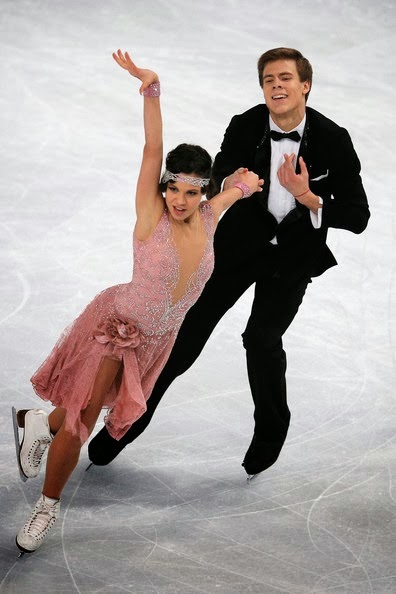 : : : : : : : : : :
Penny Coomes and Nicholas Buckland also took a formal approach to costuming for their short routine. The British pair danced to “I Won’t Dance” by Fred Astire and “Swing Set” by Jurassic Five. Flow and flirt best described Penny’s sequin and lace costume…and the micro-mini skirt was just darling. Coomes’ dress was fancy, feminine and perfect for the ice. And I must point out another beautiful headpiece. Buckland’s after five attire was equally playful, but also very polished with black-trim cuffs, white suspenders and a sequin bow tie. 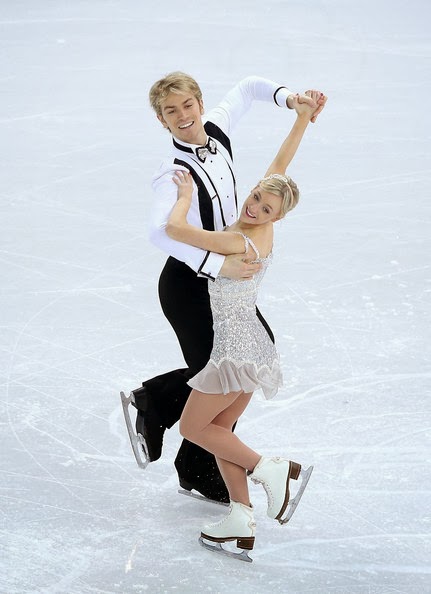 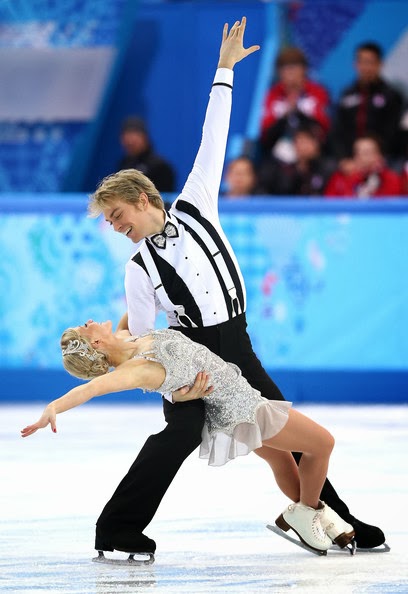 : : : : : : : : : :
US figure skater Gracie Gold has been called the Grace Kelly of the ice figuratively and almost literally speaking. Her poise and perfection in and out of the rink, along with her natural beauty, has drawn similarities to the late Princess of Monaco. And believe it or not Gold’s costume designer, Brad Griffies, also designs costumes for Grace Kelly’s granddaughter. While planning for her free program which was set to “Sleeping Beauty,” Gold wanted to channel “Old Hollywood” and that was exactly what Griffies was able to produce with the periwinkle and royal blue stunner that he showered in 1,400 beads. 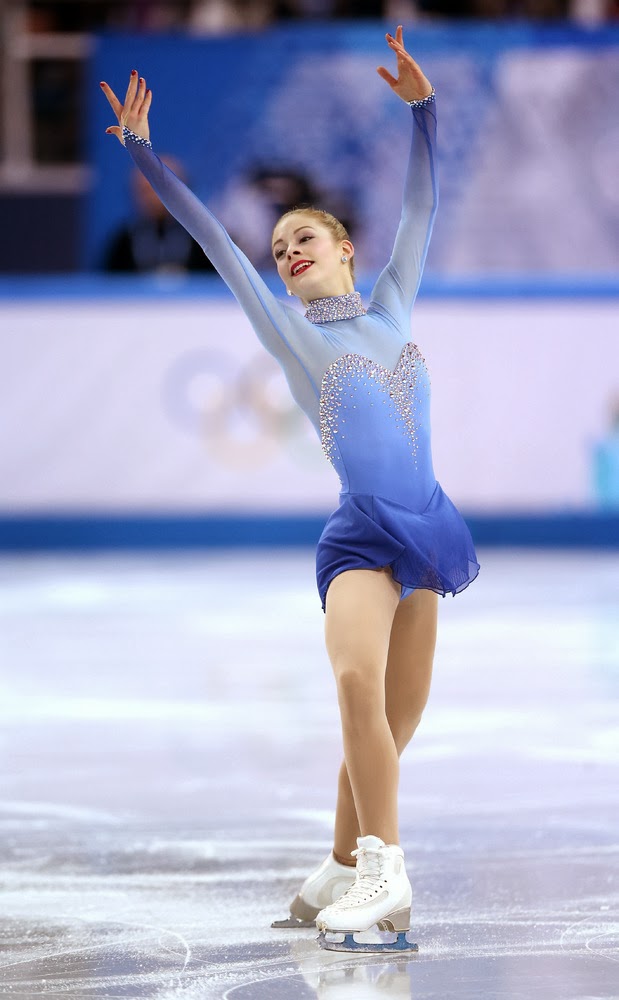 Despite the controversy swirling around Julia Lipnitskaia’s performance to the score to “Schindler’s List,” the 15-year-old Russian figure skater demonstrated incredible athleticism and made ice skating look truly effortless. And that’s the sign of a phenomenal skater — someone who makes the sport look easy to the audience. In terms of fashion, Lipnitskaia’s red coat dressed with beading and accompanied by a grey chiffon skirt was classic, striking and simply beautiful. 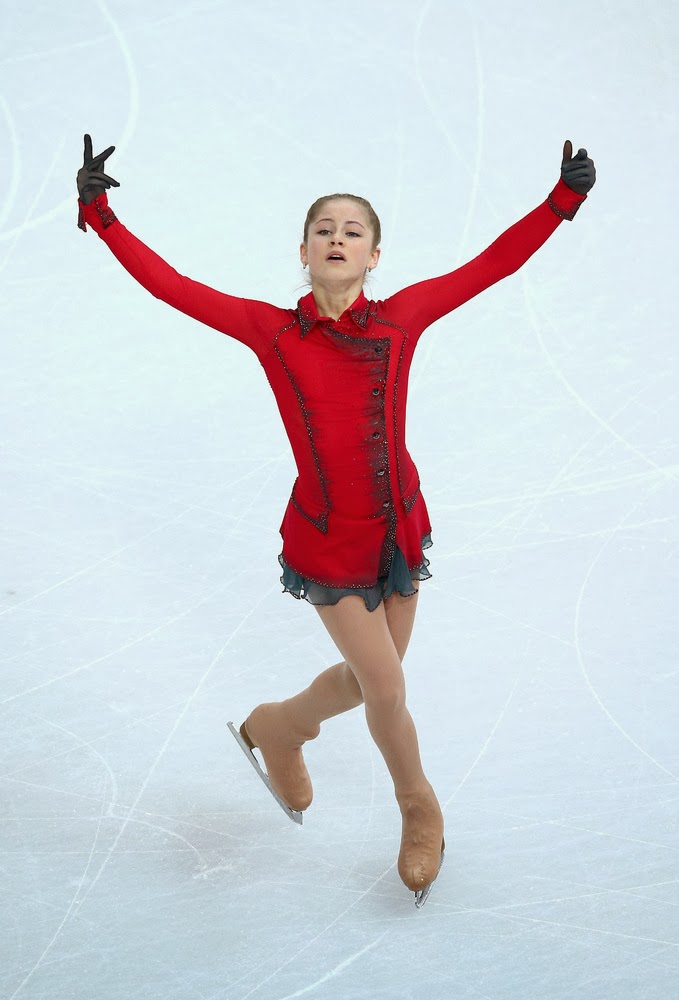