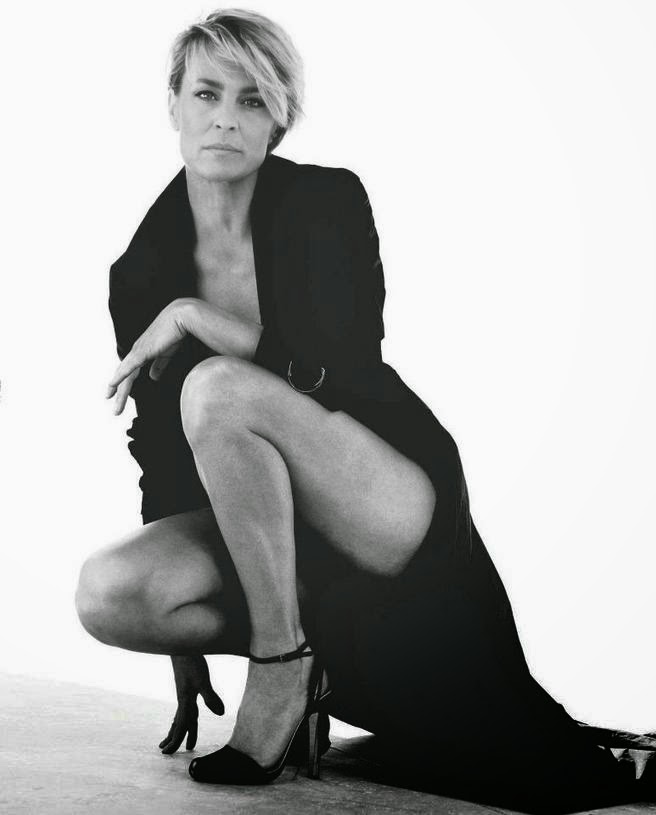 In honor of the season three release of House of Cards a mere 72 hours ago, I’m talking all things Claire today. I’ve been mesmerized with the minimal-chic-power dressing of Robin Wright since her Netflix debut as Mrs. Frank Underwood in 2013. I just can’t get enough of the well-tailored, Washington, D.C. wardrobe she so elegantly sports in seasons one and two. A consumer of clean lines and architecturally-sound pieces, the pixie-haired goddess rocks a shift dress and man-tailored shirt like nobody’s business.

Claire has offered us a promenade of high-end, form-fitting staples and left many suffering from serious closet envy. Her monochromatic mile of black, navy and grey in the likes of Narciso Rodriguez, Ralph Lauren, Theory and Burberry has left me salivating. And if you haven’t yet begged for a glass of Champagne to quell your thirst, then this may not be the fashion show for you.

Neutral tones aside, the one pop of color that has continually appeared on-screen in past seasons has come in the form of red bottoms. Just thinking about the suede Louboutin boots Claire sported in season two makes me weak in the knees. Remember the episode where she had a mini-cry sesh on her staircase (looming over the endless souls she’d stepped on to get to the top)? Then, with the blink of an eye, she hoisted herself onto her scarlet soles (see what I did there?) and walked away as if all was well in the world. Icy indeed, but that’s classic Claire. It’s easy to hate her, but I’m sure we’d all love to live in her closet.

Can you just imagine her carrying a crimson Céline calfskin tote?! The accessories don’t run that wild this season, but expect to see an off-the-shoulder pale blue-lilac suit for the presidential portrait (a gorgeous piece) and a burgundy suit in a key Air Force One scene. I’m welcoming this wardrobe refresh because there are times when you just need to make a statement. But then again, this is Claire Underwood we’re talking about and no statement (bold or otherwise) is necessary when you’re the First Lady of the United States…or playing one on TV for that matter.

With Wright’s personal stylist, Kemal Harris, at the helm as Claire’s costume designer, we can expect inspiration from the late Katherine Hepburn, Lauren Bacall and Carolyn Bassette-Kennedy. This D.C. dame‘s famed black dresses and Louboutins have taken a backseat as a new First Lady look is revealed. In a recent interview with Today.com, Harris said this about the new look…

I wanted Claire to have the chance to be vulnerable and feminine without losing her true self. Her character has been fighting her way to the top for the past two seasons, looking focused and streamlined in her protective armor of strict, sharp tailoring. I softened the collars of her blouses, added kick-pleats to the pencil skirts, opted for softer sleeves on jackets and used quite a few full skirt options. Colors include pale lilac, deep green, burgundy, raspberry and lots of blue. I made a concerted effort to avoid black in her wardrobe.

What do you think of Claire Underwood’s style? Love it? Hate it? Tell me! 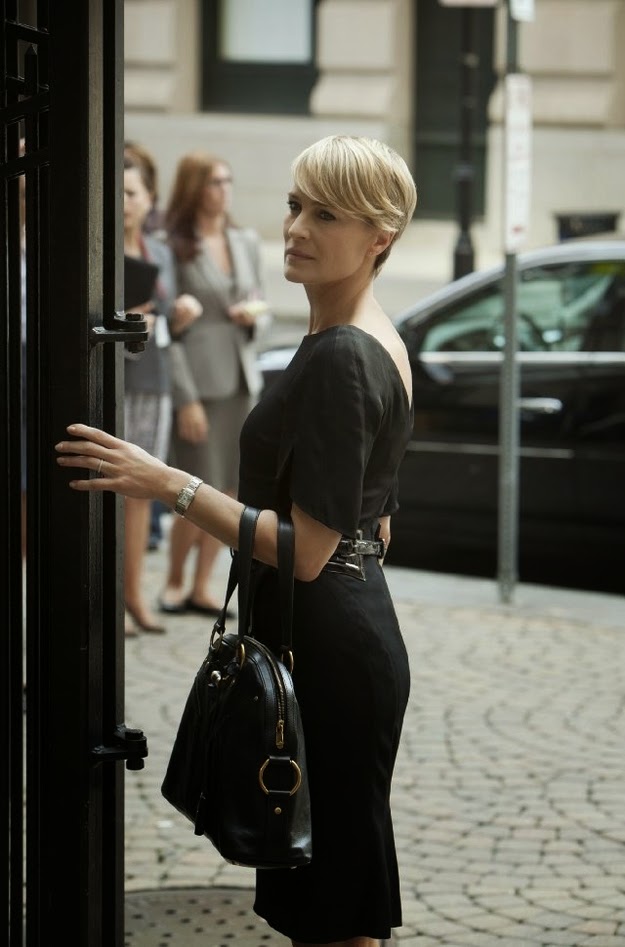 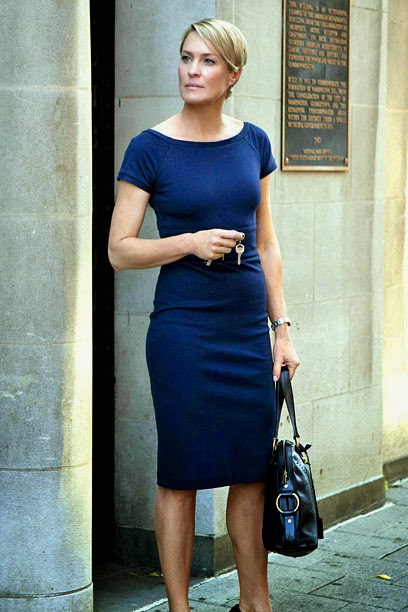 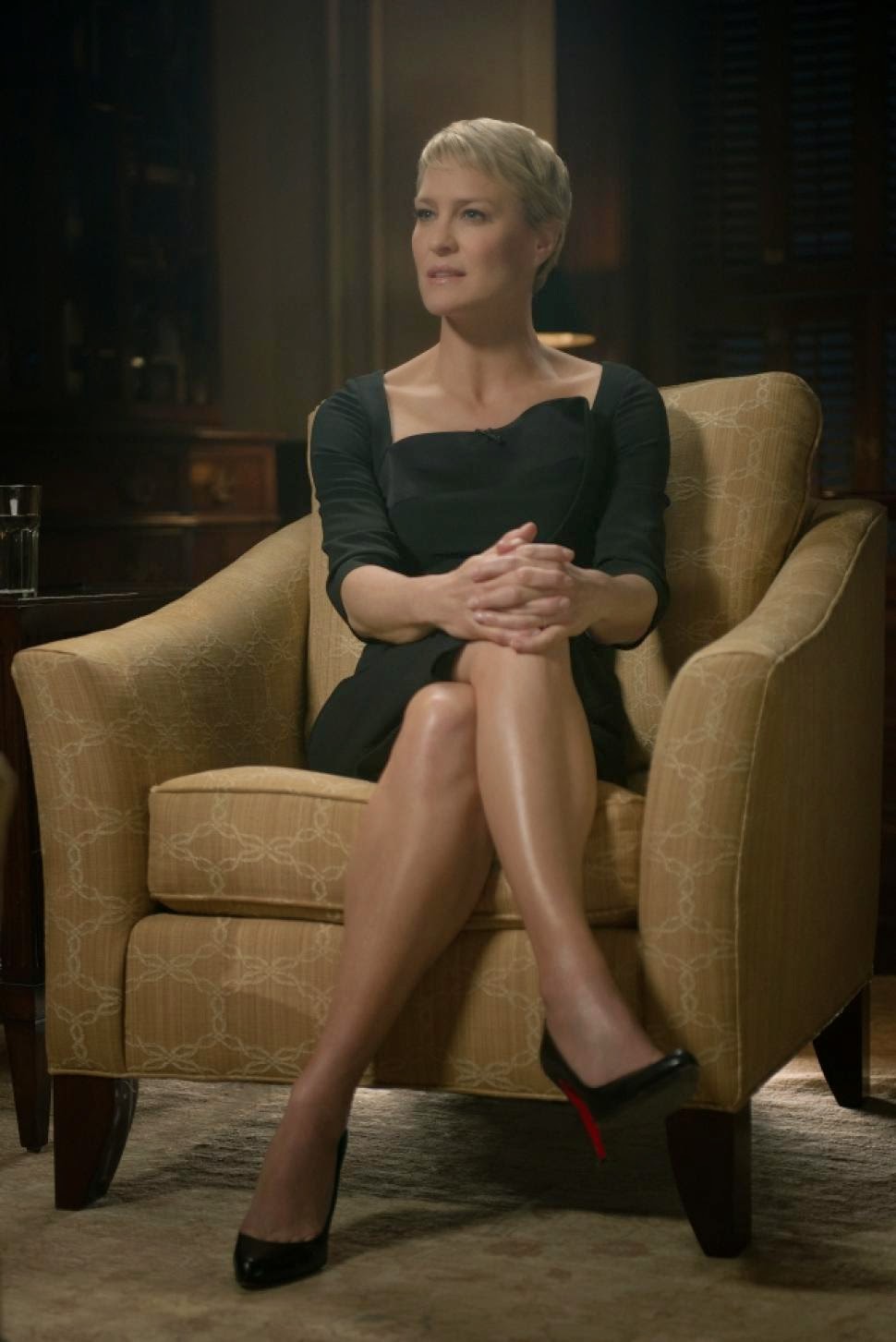 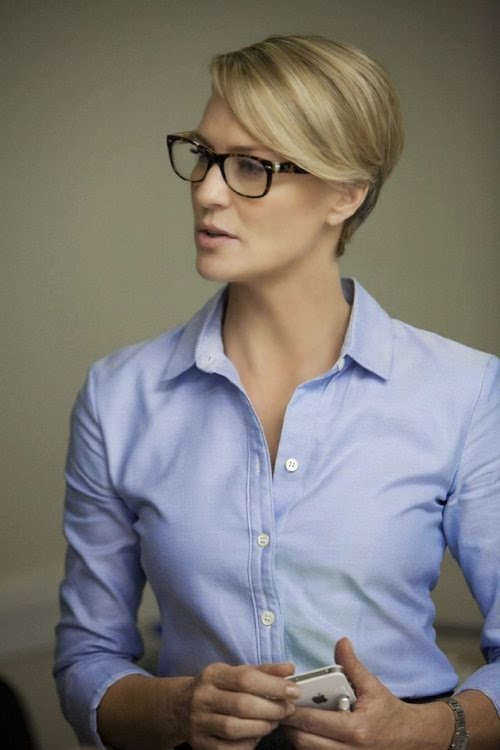 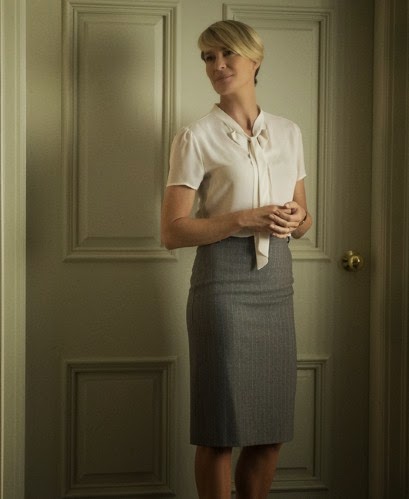