Favorites from the Oscars Red Carpet 2014

For those who are fixated with fashion and bewitched by beauty (like I am), the Oscars red carpet is the “IT” show for all things luxurious and many times laughable. This isn’t a post about last night’s worst dressed. I try to keep snarky comments to a minimum on this blog. That doesn’t mean I don’t share my thoughts on what I dislike (I definitely do). I try to maintain harmony as much as possible because this platform is more of a sanctuary than a soundboard.

Overall, the red carpet wasn’t lacking radiance or rushes of euphoria over $20,000 dresses or anything like that. The gowns, in all their glory (and some in their ill repute), were just underwhelming. Don’t get me wrong, there were darling décolletages, jaw-dropping jewels and that irritating mani cam E! seems intent on keeping. But it felt like many celebrities just played it safe. And who can blame them?! They’re criticized for things that are too over the top and clothes that are too conservative. And now, on to my five favorites.

I  mean Cate Blanchett doesn’t need my two cents. Her nude Giorgio Armani stunner said it all and those opal drop earrings from Chopard were out of this world. This is what a REAL movie star looks like, kids. Cate is one for channeling that timeless je ne sais quoi like nobody’s business. And her performance in Blue Jasmine was epic and worthy of her best actress win. Oh, and I must add that my mom called me immediately upon seeing Cate to chime in that her dress washed her out. I, on the other hand, have been infatuated with the the nude/skin overlay look as of late. 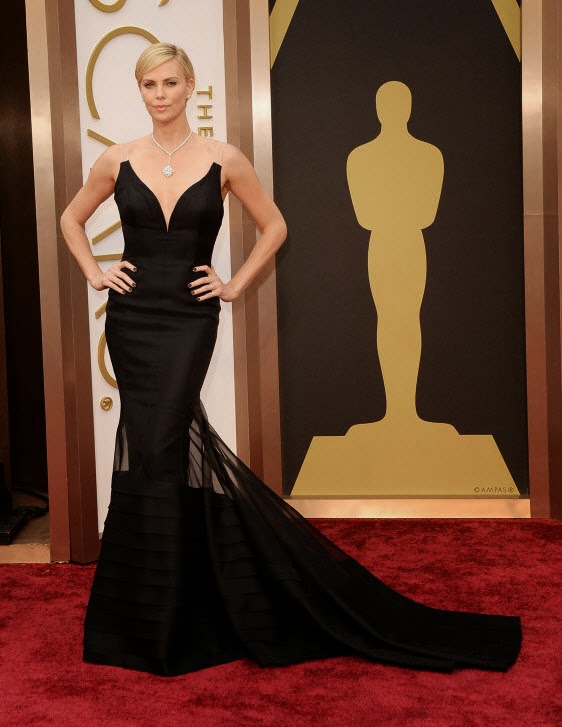 Charlize Theron accented her already-brilliant Christian Dior haute couture gown with $15 million worth of diamonds from the legendary Harry Winston. Swoon! I remember the first time I visited a Harry Winston store. Triple swoon!!! This dress was sleek, sophisticated and a statement all by itself, but the drop necklace and studs really pulled it together. You need bold biceps (which she has) for those translucent straps. Meow! 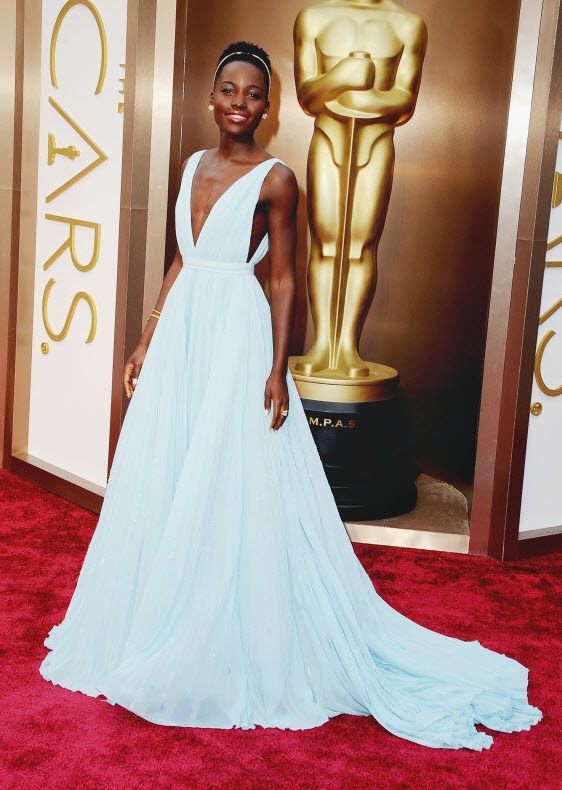 Lupita Nyong’o was perfection (almost) in a plunging Prada gown. The pastel blue was soft and sweet against her skin, while the pleated detail and elongated train were very Grecian goddess. And although I loved her gold and diamond headband from Fred Leighton, I was not a fan of the way it looked with her hairstyle. I’m not quite sure how I would change it since I’m not a hair stylist, but I would have loved to see something different. 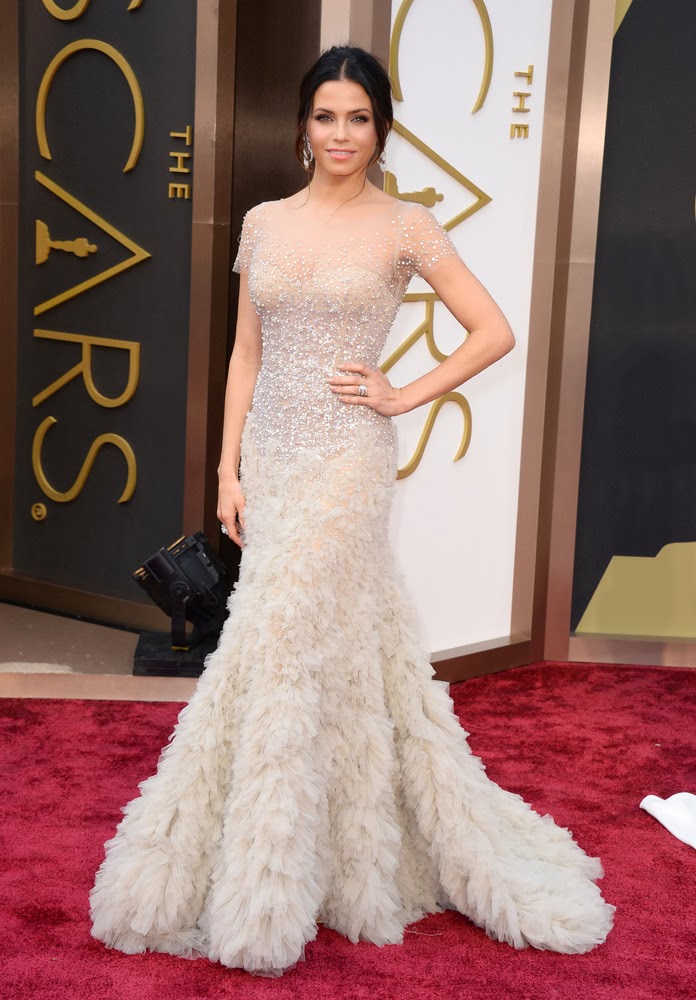 Jenna Dewan-Tatum was radiant in Reem Acra (another favorite next to Elie Saab). I don’t know what it is with me and champagne-colored dresses lately, but I’m all over them. You could argue that Jenna’s dress looked a little bridal (like for the non-traditionalist or second-time-around bride), but regardless it was stunning. The sheer top was so intricate, so feminine and just so beautiful. With similarities to Cate Blanchett’s nude number, it was a difficult decision. 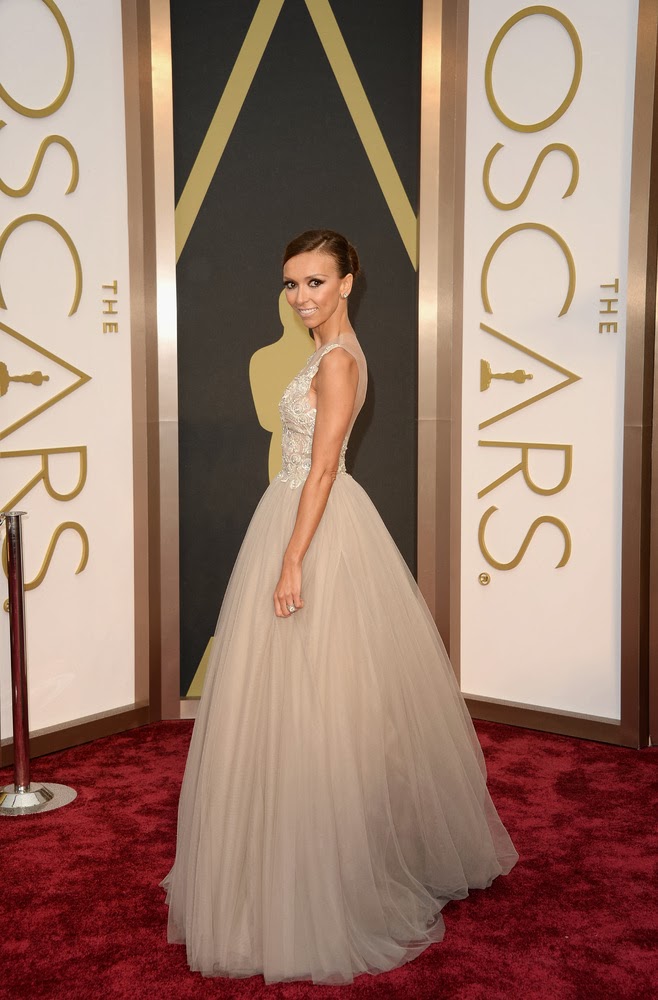 Giuliana Rancic’s Paolo Sebastian gown was a stunner. Yes it was princess-like, but like Jenna’s dress it was delicate and demure. Unfortunately, Giuliana experienced an on-air wardrobe malfunction when her zipper broke. What’s funny is that recently, I contacted Paolo Sebastian’s studio in Australia to inquire about a wedding gown. Something like Giuliana’s would be killer! I was told all gowns are custom and can be fitted in-person or via Skype. Since I had no intention of making several trips Down Under and would never trust body measurements via Skype, my dreams of a Paolo Sebastian dress are now a thing of the past. After Giuliana’s mishap, maybe that’s a good thing.

Who were your picks for best dressed?